And winter it has been, more on that later.

The big news from our last update was our completely unexpected major repair on the coach engine and the purchase of a new car – two related events.  I’m sorry I left a few readers in suspense over details about the cost of the engine repair, I answered an email a few days ago from somebody who asked what the outcome was.  We were very pleased the entire bill was about $8,000, while we’re not thrilled about shelling out $8k the bill could have been much worse (note that we had other work done as well, the head repair itself was about $5k.)  The problem was solved by a rebuilding of the head but Kirk of Freightliner had no details from the shop that actually worked on the head.  The valve guides were bad so I’m assuming all of them got replaced but no word if any of the valves themselves had an issue.

Upon word from Kirk that the coach was ready to be picked up, we made plans to drive the new Passat (it already has over 4,000 miles on it!) back to Phoenix, pick up the coach and then caravan back home.  The scheme was for Jane to drive the coach in the mornings and then the Passat in the afternoons and that plan worked out extremely well.  Driving the coach solo was a bit of an unusual experience since we are almost always both in it on the road but we quickly adapted to being alone and kept in touch via radio talkies. 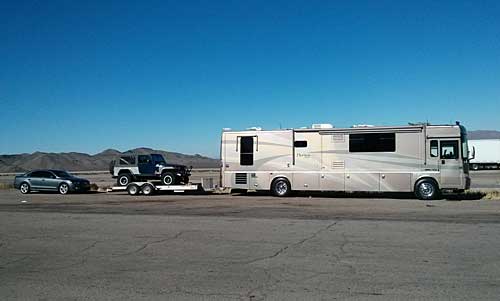 The caravan heads home – a rest stop in west Texas

We always drive the coach at 65 mph and the Passat gets to go the speed limit but for caravan purposes the Passat had to poke along at 65.  Wow what a difference in MPG that made!  When we were driving the Passat 80 mph (very legal in west Texas), our average mpg was low to mid 30s, on the same highway at 65 mph, our average MPG was over 50!  Holy cow!  The beautiful thing is the Passat’s mileage will continue to improve as the engine gets broken in. We are lovin’ this vehicle 🙂 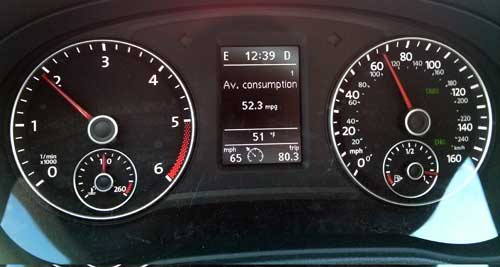 Speaking about performance, the coach’s big Cummins ISL engine is running better than it ever did when new.  This I immediately noticed when watching the amount of boost the turbocharger was producing, it is making more boost and the boost is staying higher for longer than I have ever seen.  There must have been some sort of issue from early on with the head or exhaust system allowing some of the exhaust gas to bypass the turbo.  The more exhaust gas that goes by the turbo vanes the faster it spins and the more boost (measured in PSI) it produces.  I’m also thinking our fuel economy might improve a tiny bit – we’ll see.  Some might be wondering if we’re going to go back to Cummins and present the situation to them for some possible goodwill reimbursement.  Possibly.

And they shall come two by two…. 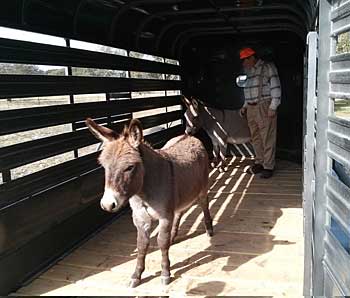 Bill helping to get the donkeys out of the trailer 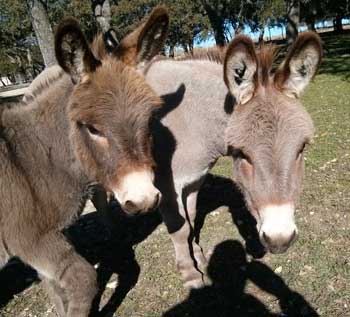 Moonpie and the jenny – she doesn’t have a name yet. Suggestions?

We have completed our JJ Ranch “zoo” with the addition of two miniature donkeys, one is an adult jenny (female) and one is a yearling gelding (he used to be a boy.)  John has always wanted donkeys and Jane’s brother Bill had a couple of them that needed to go to a new home so the die was cast to add two more mouths to feed to JJ Ranch.  (Actually they will do fine just grazing and don’t need any food supplement so they will be easy care.) The donkeys are incredibly stubborn (that’s supposedly equated with being smart) and loading them in Bill’s trailer took three of us about 20 minutes and unloading was almost as difficult.  We got the little gelding (Moonpie) out of the trailer and when we were trying to move the jenny out, Moonpie jumped back in.  Great.  We pushed him back out and with continual shoving and pushing the jenny finally gave up and we shoved her out.  Keep in mind these are miniature donkeys (less than 36″ tall at the withers) that we were struggling and fighting with.  Can’t imagine working with a standard size donkey.

The first morning (with the donkeys on the property) I walked Sassy (walkies are the 600′ from the house to the front gate and back), the donkeys noticed Sassy and they both started chasing her at full gallop.  Oh my gosh, I could only stand there and watch the scene unfold.  To my great relief, Sassy was about half a donkey length in the lead and stayed there.  This could have turned ugly since donkeys hate canines.  Sassy must have looked like a fox, they probably hate them as well.  Since that contest of speed, we have taken care to gradually introduce Sassy to the donkeys and they now seem to be used to her and don’t see her as a threat.  We hope.

About that winter thing….

It’s started out as a very nasty one, this past Monday we had the Polar Vortex (love that term – it sounds like an old Irwin Allen disaster movie) visit us here in the Texas Hill Country.  Holy cow we got cold,13.6F and we stayed below freezing for about two days.  Hey you Canadian people up there – keep that mess north of the border, eh? 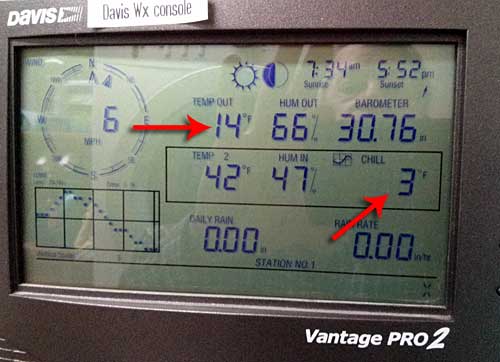 You would never guess – we’re headed back to Moab in late April for more fun, fellowship and rock crawling with the Family Motor Coach Assn 4-wheelers.

Stay warm, have fun, and be kind to one another.  Blessings from our house to yours.