Summer must be over because football has started – yea! (Go Texas Longhorns, Dallas Cowboys, Houston Texans, and Miami Dolphins!) 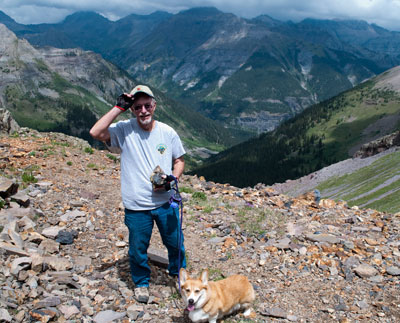 John and Sassy in the San Juan mountains

We last left off with us in Montrose, Colorado at our favorite campground (Centennial RV Park) and as usual, had a great time with our friends in the Western Slope 4-Wheelers club running around the San Juan mountains at 10-13,000 feet of elevation.  This year we didn’t spend quite as much time there as usual (about five weeks) because we had some other activities planned – we 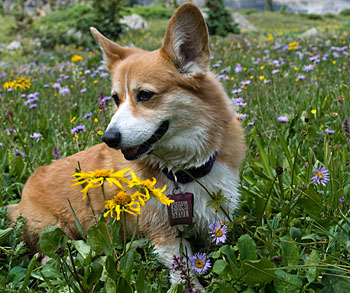 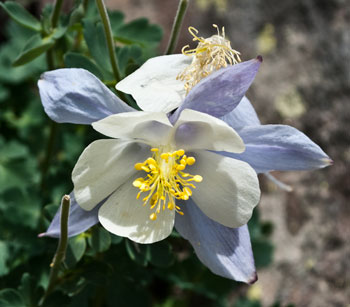 The Columbine – state flower of Colorado

were going to dry camp (no water/electric/sewer) in Leadville, Colorado at the All-for-Fun off-road event for a week (first time with the 290 watts of solar power I installed last summer and a residential-type of fridge), then we went to Chama, New Mexico to ride the Cumbres & Toltec steam train (we still like the Durango and Silverton train better), and then back home. The reason for coming home so early was due to our dear old friends 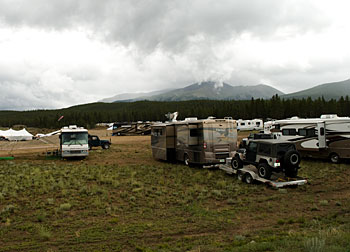 Just parked in Leadville, Colorado for the All-4-Fun off-road event. 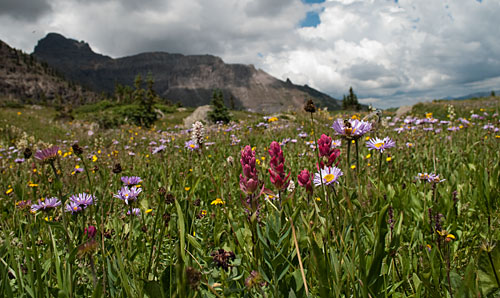 (Les & Karen) inviting us to spend a week with them on the beach at their time share in Cocoa Beach, Florida.

Remember earlier in the year when the house air conditioner needed to be replaced?  Continuing on in that same vein the washer/dryer combo unit in the coach decided to stop drying so Jane basically was left with a washing machine.  Not a huge deal because almost all campgrounds have a few washers and dryers available, but the Splendide needed to be repaired ($$.)

Then a couple of days before we arrived home, the GE Advantium microwave/convection oven decided to not work ($$$$.)  This was a big deal since Jane had some frozen meals that really needed an oven to properly cook and all we had working was a cooktop.  The washing machine and Advantium oven are eight years old and their failing while a disappointment is not totally unexpected (can’t believe we’ve been running around North America for eight years!)

The Splendide problem was the main circuit board ($325 + shipping) and the Advantium problem was not determined and whatever the cause was, most likely was not worth repairing (an eight year-old appliance that’s been bouncing on the road for 87,000 miles.)  So.. hello new Advantium (sigh, $1,000.)  The new Advantium was installed by John and helpers a couple of hours ago.

Jumping around a little bit with the narrative, we had a great time in Cocoa Beach with our buds but we forgot what 100% humidity feels like.  Wow – it’s like having a hot and damp towel wrapped around your entire body when you aren’t in air conditioning.  After fun and frivolity (and several way fun cocktail hours and dinners out) we pointed ourselves to Ft Myers to visit with some other very dear friends (going back to the 1980s), Bob and Judy.  Bob had heart bypass surgery a few months ago (with a complication) but he is doing well – it was great to see them again.  Then we headed to Naples to visit with our physician nephew Erik and his physician wife Karen and their three small boys; they are escapees from NY state and we are delighted to see them relocated south.  They are doing great and loving their new location. 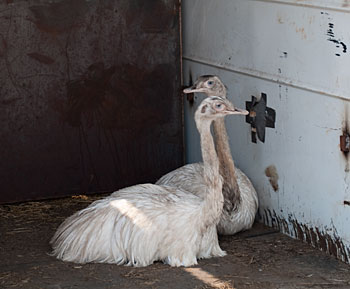 Ranch stuff – the Rhea birds were delivered a couple of weeks ago and they are settled in and doing very well.  We discovered that the birds leave a rather large pile of green poop which our newly bathed Sassy the corgi discovered and rolled around in a few days ago.  Sassy is just like a two year old human baby – turn your back on them for ten seconds and look-out, chances are she’s doing something against house rules.  So Sassy was quite the smelly mess with a bit of her covered in green poop –  we gave her another bath on the deck.  Never a dull moment.

breeder male.  We wanted genetic diversity to improve the health and bloodline of the herd so this was a huge moment for us.  We haven’t seen the herd in a few hours but we’re hoping the new big man on campus (BMOC) will settle nicely into his new role as patriarch of our herd of 25 or so does and spike bucks.

While driving the Jeep Rubicon around Colorado on the highways this summer, we decided that something had to happen as far as more power.  The Rubicon sometimes can just barely make the speed limit with the engine screaming along at 4,000+ RPMs – it’s frustrating for us as well as the poor folks following behind us.  The solution was more power was needed – this could either be: 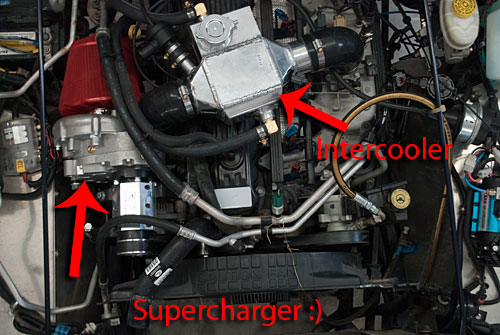 The supercharger is almost installed 🙂

a complete engine/drivetrain change out for a V-8 Hemi (mega bucks) or getting more power out of the current engine (mini-bucks relatively speaking.)  So, after doing some research and talking to owners of supercharged Jeeps similar to ours, we decided to supercharge the Jeep’s straight-six engine.

Like always, John did all of the work and the results are spectacular – the wheel horse power went from about 100 to 211 HP. Wow.  Here’s some videos of the unboxing of the supercharger kit, a dynamometer run before and after supercharging and a road test.

Next on the agenda is to head to Clayton, OK mid-October  for a wheeling event and then on to St. George, UT for – wait for it – more off-roading 🙂