Okay, not for life as we know it but for those of you using Windows XP, Microsoft will completely drop support (like security updates) for Windows XP effective April 8, 2014.  Here’s a road map for end of life for their other operating systems (which may change in the future like it did for XP.)  I think I remember official support for XP was supposed to be dropped a few years ago but MS (Microsoft) discovered that it was still in widespread use both in businesses and for personal use (and still is.)  Time to move on.

Jane has an older small form factor PC in her office running XP and she just used it for email and some light web browsing and it worked fine for those tasks.  The hardware wasn’t very fast and it didn’t have much memory but it ran XP okay and it was good enough.  It was time to move Jane’s PC to something else and I was originally going to install the free Linux operating system Ubuntu on it but she has a few hidden object games that only run on Window machines and there was a couple of other considerations at play. The hardware was too old and slow for Windows 7 or 8 (and an OEM copy of Windows 7 is about $100!) So what to do…

I started looking around on the Internet for inexpensive PCs and focused on refurbished models.  After a bit of surfing I came across overstock.com – they had quite the selection of not-that-old PCs running mainly Windows 7.  For $200-250 you can pick out quite a nice 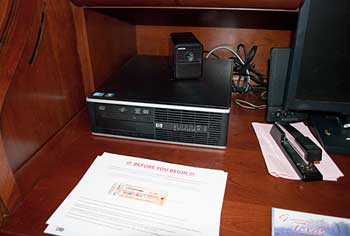 PC with 4 Gb of memory with hard drive sizes of 250 Gb and up.  I chose this HP model with Windows 7 professional 64-bit, 1 Tb drive, 3 Gb CPU and 4 Gb of RAM and it was about $250.  Shipping was free but took about a week.  The unit was in very nice cosmetic condition and very clean on the inside.  The only issue with the purchase I discovered was that there was only a VGA output for the monitor which meant it was going to be very low resolution graphics and text.  Since I installed a higher resolution graphics card in Jane’s old desktop, I simply moved it over to the “new” PC. (Higher resolution means either a DVI or HDMI connector is required.)

So if you buy a refurb PC from overstock.com, be certain what kind of graphics capability the machine has before you click on the buy button.  A small form factor PC usually requires a low profile graphics card and if you need to add one, they aren’t that easy to find.

Anyway, Jane’s “new” PC is fast and should serve her for years to come.