Usually I don’t have to spend much time figuring out a title for this blog but I have had a range of emotions from one end of the scale to the other from last fall to today. 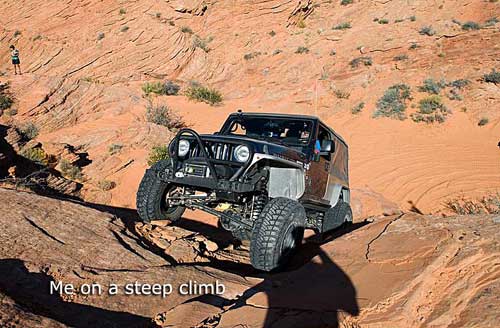 We were doing our usual rock-crawling thing last October and November in St. George, Utah and then Elephant Butte, New Mexico with the FMCA 4-Wheelers. Then in early January my life dramatically changed when diagnosed with prostate cancer, more about this later.

So we left off last time with the passing of our sweet Sassy the Corgi – we still often think of her and dearly miss her.  She was a very special pet and can never be replaced but after only three days, I couldn’t stand it any longer and we called the breeder in hopes of getting another Corgi as soon as possible.  Jamie was very understanding and we made the 120 mile trip to the Austin, TX area and looked at two possible doggie candidates to add to our family.  Jamie had Sarah, nine years old that she was willing to part with and then Luna, a three or four year-old female that Jamie was going to breed. 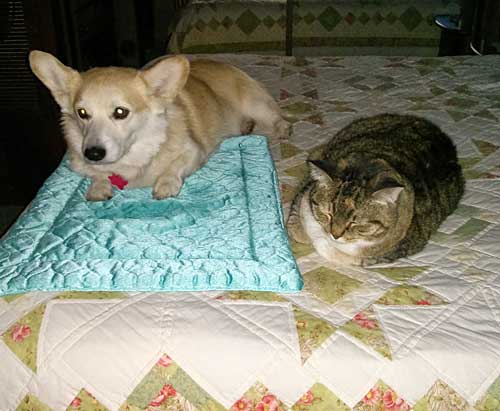 They were both sweet dogs, Sarah and I hit it off right away and Luna took to Jane.  We would have picked Luna since she was much younger than Sarah but she wasn’t going to be available for several months while she had and raised a litter so we left with Sarah as our newest family member to attempt to fill the void that Sassy left. Like people or even identical human twins, dogs have a distinctive personality and we quickly realized that Sassy and Sarah while Corgis on the outside were completely different on the inside.

Sassy loved to play fetch, Sarah not at all.  Sassy was always plastered right next to Jane while on a couch but Sarah is happy just being nearby.  Sassy was good off-leash and we could walk her off-leash on the ranch but unless Sarah is on a leash, she will immediately head for the nearest pile of poop for a quick snack. Differences aside, we love Sarah and have no regrets about bringing her home.  Oh, one thing Sarah likes to do that Sassy didn’t is riding in the Jeep.  Sarah is perfectly content to be with us while banging and crashing in the Jeep – Sassy hated that!  Jane and I have been toying with the idea of perhaps adding Luna to the family as well so Sarah can have a doggie buddy.

After a very fun fall we headed home for the winter but unfortunately winter beat us home and we had an extreme cold snap with several days of lows 20-25F mid-November.  This was hard on the antelope and we lost three or four babies and at least one adult, very sad to see an animal die especially a baby. 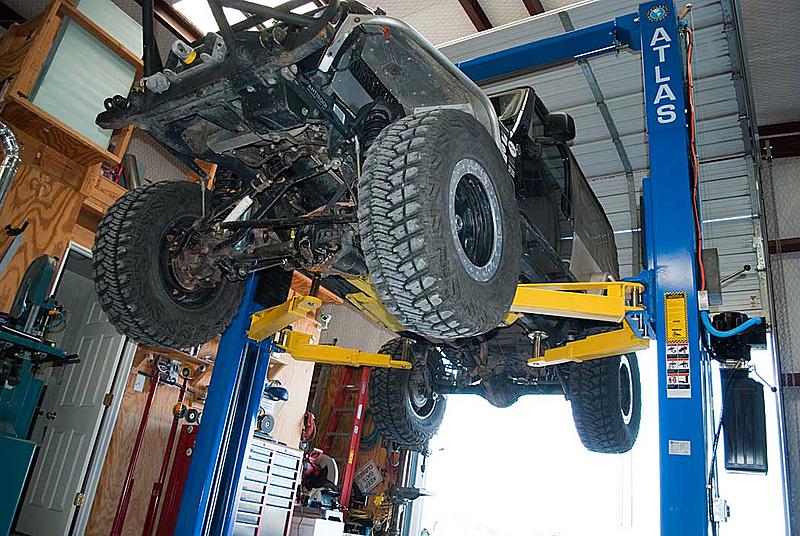 On a lighter note I made a major addition to the shop – a vehicle lift like you would see at a garage.  I enjoy doing all of the maintenance and upgrades on the Jeep and since it has a hard life (and I need to trust its performance) all of the fluids get changed every winter.  It’s not a simple engine oil change – I also change the differential and transfer case fluids and this year the transmission fluid.  While I enjoy the work, my body doesn’t and I couldn’t take lying under the Jeep and attempting to work on it any longer so I looked into buying a two post vehicle lift – drive the Jeep between the posts, position the lifting arms under the frame and push a button to lift the Jeep.

After quite a bit of research I decided to purchase and install an Atlas PV-10P 10,000 pound lift from Greg Smith Equipment in Austin, Texas.  Jane and I drove there, picked out a lift and accessories, had it loaded on my big trailer and off it went to its new home.  Installed it in about a week and immediately started using it- wow and wow.  It’s wonderful to stand under the Jeep and work on it now, so much easier and it is a bunch more fun.

Then the hammer fell.

I had a scheduled annual physical with my primary care provider at the VA and he noticed my PSA had risen from the high 3s to a low 4.  A PSA of 4.0 is generally considered a trigger point for further investigation, the Doc did a digital exam and said the prostate felt hard on one side and a urologist confirmed that.  Soon after I had a prostate biopsy and not so good news – cancer.  Mostly a low grade (Gleason 3+3) cancer but there was a lot of it on the left side.  Talk about a life-changing event – this was it for me.  Never in my life have I been confronted with such a serious health issue and even though I’m a Christian who believes in the gift of eternal life, I was worried and scared.

Fast-forward past research, investigation, wondering and worrying we were given a name of a prominent Urologist at the world famous MD Anderson Cancer center in Houston to consult with. After discussing the various options with John W Davis, M.D., we decided on a robotic assisted radial prostatectomy.  This consisted of Dr. Davis sitting at a console and remotely manipulating the tools at the end of the robot arms of the da Vinci machine for 2.5 hours.  Most prostates are small, about the size of a walnut and excising the gland is very difficult since it has critical nerve bundles on both sides and the urethra runs right through it.  (I’ve learned more about the prostate this year than I ever cared to know.)

Dr. Davis has performed over 2,000 of these procedures in the ten years or so the machine has been approved so thanks to his skill and experience he was able to spare some of those critical nerves.  Now begins another waiting game.

If subsequent PSA tests show a zero PSA, then the cancer is gone, if not I have some residual cancer cells left and I would most likely need a series of radiation treatments.  So we aren’t necessarily finished with the cancer beast, I pray so but time will tell.

For those who have prayed for me during this most difficult time, I thank you from the bottom of my heart.  I know for a fact prayers work and they did in this case.  Please continue to pray for me that I will have a zero PSA in the future and Dr. Davis excised all of the cancer. 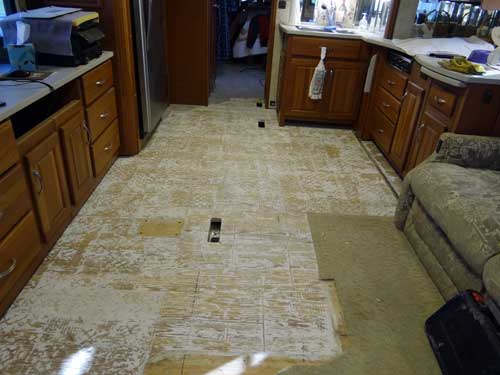 Demolition of the old carpet and tile

If all of this wasn’t enough to deal with, we made an appointment many months ago with Ernie Eckberg Remodeling and Repair in Weatherford, Texas to get all new flooring installed in the coach for the last two weeks of February.  Ernie is booked a year in advance so I wasn’t about to give up my appointment slot with Ernie even considering my prostate surgery – we would somehow make this work.  So we took the coach to Ernie and I stayed there for a week helping Ernie pull up the old carpet and chip up the old tile and then had to leave to make pre-surgery appointments at MD Anderson.  Since travel is still somewhat difficult for me, Jane and a girlfriend drove up to Weatherford yesterday and Jane will drive the coach home today – can’t wait to see it in person. 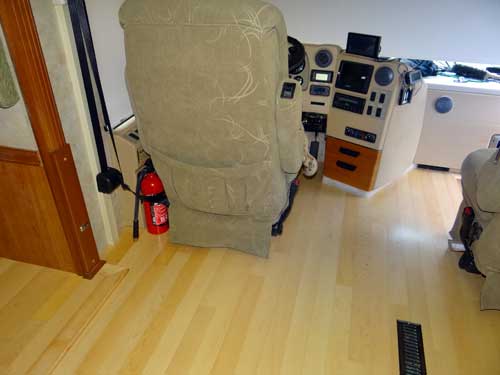 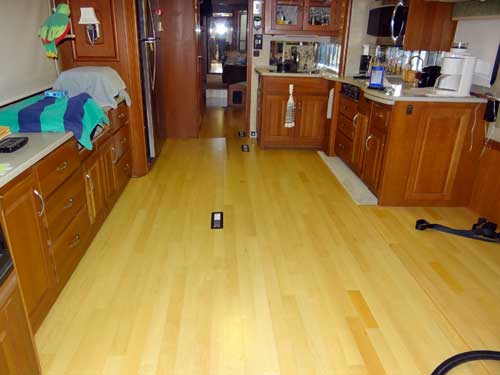